×
Looking for one product in particular?
Type the name or type of the household appliance you are looking for and click Find to display the items available.
25 July 2022

Yogurt made at home with a yogurt maker, a health, environment-friendly choice

If, like many people today, you’ve decided to adopt a healthier, more sustainable lifestyle, your daily consumption choices are probably oriented towards reducing environmental impact, including a preference for non-industrial foods. Yogurt might be one of these. A food considered healthy because of its beneficial properties, it’s generally sold in supermarkets in 125 ml plastic tubs or glass jars, although luckily paper packaging is becoming more and more common. As an alternative, you can get into the habit of making your own yogurt, which is good for you and reduces waste. The quickest, easiest way to do this is to use a yogurt maker. Here’s everything you need to know about yogurt made at home with a yogurt maker, and the process involved. 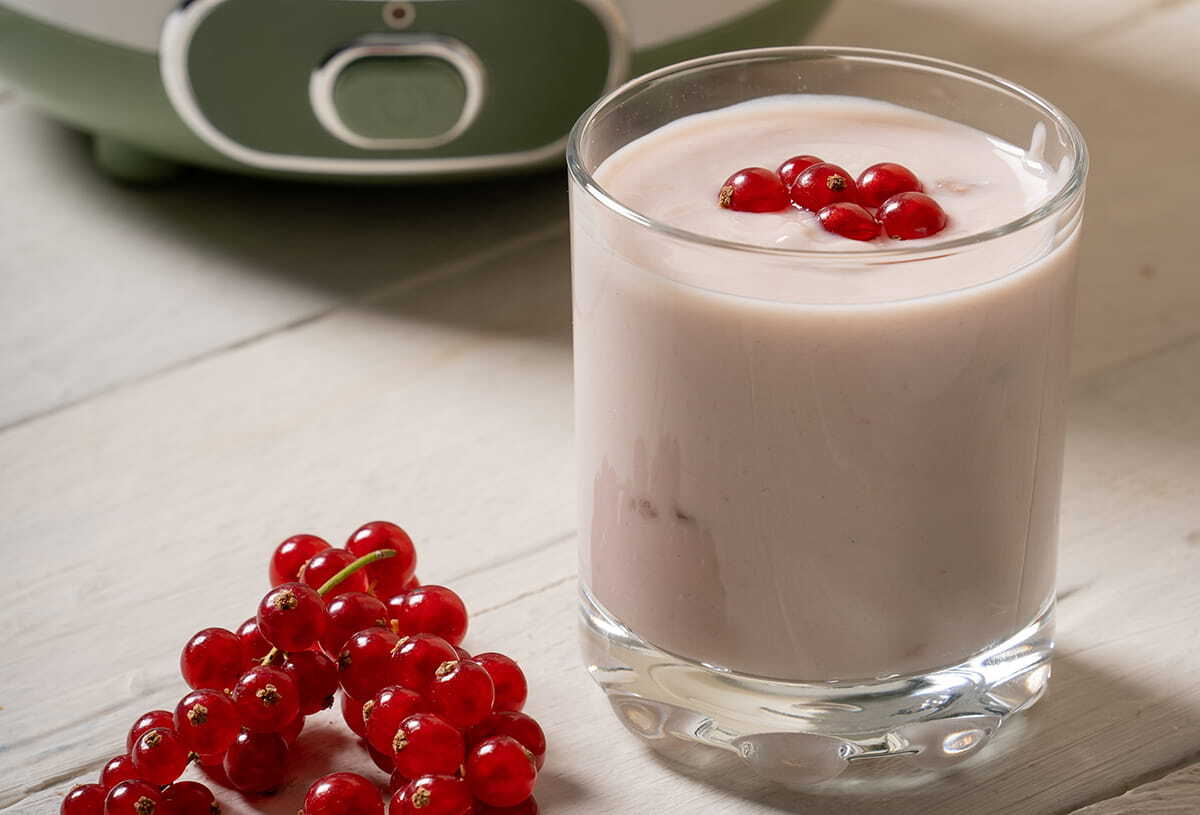 What is yogurt and why is it good for us?

Yogurt is a very ancient, very widely eaten food made from milk, with a creamy consistency and a slightly sour taste. The taste is due to how it is made: by fermentation by lactobacilli, a category of bacteria. Lactobacilli - Lactobacillus bulgaricus and Streptococcus thermophilus - metabolise lactose or other similar carbohydrates, transforming them into lactic acid. Apart from cow’s milk, other types of milk can also be used, including vegetable types, so some yogurts are also suitable foods for people with lactose intolerances or for vegans. Once the “starter” (consisting of the lactobacilli) has been added to the milk (in a process known as inoculation), the bacteria proliferate, converting the milk into yogurt by forming a coagulate with a denser consistency. The higher the fat or oil content of the initial milk (e.g. full-fat UHT milk), the creamier the final consistency. If you prefer a denser yogurt, don’t stir at the end of the process; for a thinner yogurt more like a cream, stir once fermentation is complete.

When lactobacilli reach the stomach they die on contact with the gastric juices, so it is now believed that yogurt’s beneficial properties are due not to them but to probiotics, bacteria which can be added to yogurt and which are able to pass through the gastric juice barrier and reach the gut, where they thrive and reproduce, with health-giving effects. Benefits include restoration of the intestinal flora, strengthening of the immune defences and prevention of bacterial and fungal infections. Other beneficial properties of yogurt are due to the nutrients it contains, as it is a source of vitamins, calcium, potassium and sodium.

As we’ve already mentioned, one of the advantages of home-made yogurt is its eco-friendliness, as it reduces waste. If you eat yogurt every day, you’ll no longer be throwing away a lot of empty jars, and what’s more you’ll save a great deal of money, because buying the ingredients to make your own yogurt costs a lot less than purchasing industrial yogurt, especially if you’re quality-conscious. However, the biggest gains will be to your health, because the yogurt you produce will be genuine, free from colourants, artificial flavours or preservatives of any kind. Home-made yogurt only contains what you decide to put in it, so if the basic ingredients are of good quality, you can be sure that the end product will be just as good. It will keep in the fridge for a few days, 4 or 5 at the most, which means that the product you eat will always be very fresh. Last but not least, you can create exactly the yogurt you want by choosing not only the ingredients to flavour it but also the type of milk you use as a base, which may also be lactose-free, or rice, oat, soy, coconut or almond milk. The result will inevitably be less creamy than a yogurt made with full-fat cow’s milk, but with a few changes to the process, such as longer fermentation times or the addition of a little sugar, you’ll be able to get good results. 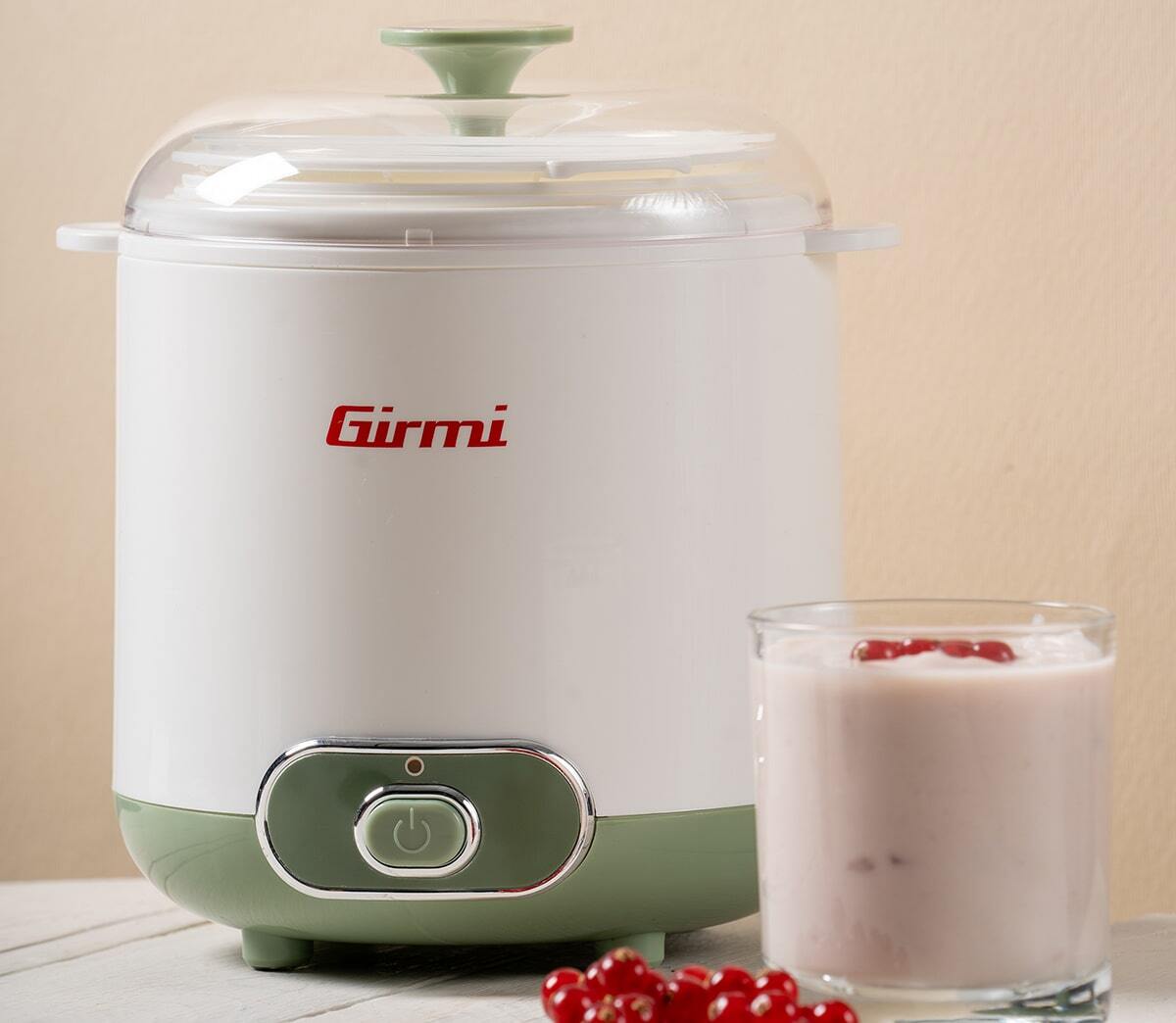 A yogurt maker is a small household appliance with which you can make yogurt in 6/12 hours from two simple ingredients: milk and a starter. It works by keeping the mixture at a constant temperature of less than 55 °C, to help the bacteria to reproduce and favour acid fermentation. There are two types of home yogurt maker: the jug and jar varieties.

The most inexpensive, most compact type of electric yogurt maker is the jug type, such as the Girmi YG02 YOGURT MAKER, which has a large 1.5 litre container with clear lid with handle and works at an operating temperature of about 55 °C to produce soft, creamy yogurt. It also has accessories for making Greek yogurt, a denser, creamier variant obtained by eliminating the whey and other liquids from the yogurt for an end product with a higher nutrient content. This can be done by straining through a cloth, but the yogurt strainer accessory is much more convenient and is easily washed in the dishwasher, like the device’s container and the other accessories. This yogurt maker is recommended if your whole family eats yogurt and household consumption is high, since you can make more than a litre of plain yogurt and then everyone can complete their portion with their favourite topping, such as fresh fruit, honey, walnuts or many other options.

The Girmi YG03 YOGURT MAKER, on the other hand, is a jar yogurt maker. With the 7 single-portion glass jars, every family member will be able to have their favourite yogurt. Each yogurt jar has its own lid and can be stored separately in the refrigerator to be enjoyed as preferred. This model is ideal for those who wish to produce single portions and diversify the end result.

Making yogurt with a yogurt maker

If you’ve read this far, you’ll be curious about the recipe for home-made yogurt and how to make it. The procedure is really easy and effortless. The first step is to choose the milk, important for obtaining a yogurt with the right degree of creaminess, or for limiting lactose consumption in case of intolerances. Here we’ll consider the basic recipe for plain yogurt made from full fat or low fat milk, which varies slightly depending on whether you’re using a jug or jar yogurt maker.

With a jar yogurt maker, pour 1200 ml of milk into a saucepan and stir over a low heat until the temperature reaches 42 °C-44 °C, which will favour the conversion of lactose into lactic acid. Now add the starter. You can use a powder starter, available from pharmacies or health food stores, or just a jar of plain full fat yogurt. Next time, you’ll be able to use a jar of your own yogurt, but after a few cycles it’s best to start again with a new jar bought from a supermarket. If you’ve decided to use a freeze-dried powder starter, dissolve it in a glass of 180 ml of milk and then pour it into the rest of the milk, stirring thoroughly. Powder starter doses are stated on the pack, but generally one sachet is enough for about 1 litre of milk. The resulting mixture can be poured straight into the seven yogurt jars.

With the jug yogurt maker, use a litre of milk, first heating it in a saucepan. Then pour the powder starter or a jar of plain yogurt into a glass and add 200 ml of warmed milk. Stir until the starter is dissolved then pour the mixture into the rest of the milk and stir thoroughly before transferring to the yogurt maker container.

To aid fermentation, especially if using a lactose-free milk or soy milk, add a spoonful of sugar.

Once the yogurt maker is switched on, the mixture must be left to “work” with the lid closed for at least six hours. The longer fermentation continues, the denser the yogurt will be. However, do not leave it for more than 12 hours, as the yogurt may become too acidic. If this occurs, you will see a yellowish liquid on the surface; you can still eat the yogurt, but it will taste more sour and less good.

At the end of the fermentation time, turn off the appliance, leave the containers to cool thoroughly and then transfer them to the refrigerator for at least two hours before eating the yogurt.

Yogurt maker recipes: which kinds of yogurt you can make at home

There are very many yogurt maker recipes, and you only need a little imagination to adapt them as you wish. To make drinkable yogurt, you can follow the same procedure as for normal yogurt but shorten the fermentation times. To make Greek yogurt, as we’ve already explained, you have to filter the yogurt produced with the yogurt maker. For fruit yogurt, you can decide to add fresh fruit at the end, or you can blend it and add it to the mixture during fermentation. However, in this case, it’s best to cut the fruit into small pieces and cook it in a small saucepan for five minutes before adding it to the mixture, to eliminate some of its liquid. Yogurt can be flavoured before it’s placed in the yogurt maker; creams such as pistachio, chocolate or hazelnut varieties can be used, or you can add coffee, or vanilla, by using milk which has first been boiled with a vanilla pod. As we’ve seen, the problem with yogurts made with plant-based milks is that they may not be dense enough. Adding sugar before fermentation can help, or you can use a natural thickener such as agar-agar, very useful when making coconut yogurt (made with coconut milk), for example.